After eight weeks of learning about language, culture, cooking, medicine, and much more at the main Pacific Orientation Course facility, the time had come to begin the final part of the course: four weeks living in a village, immersed in PNG culture. 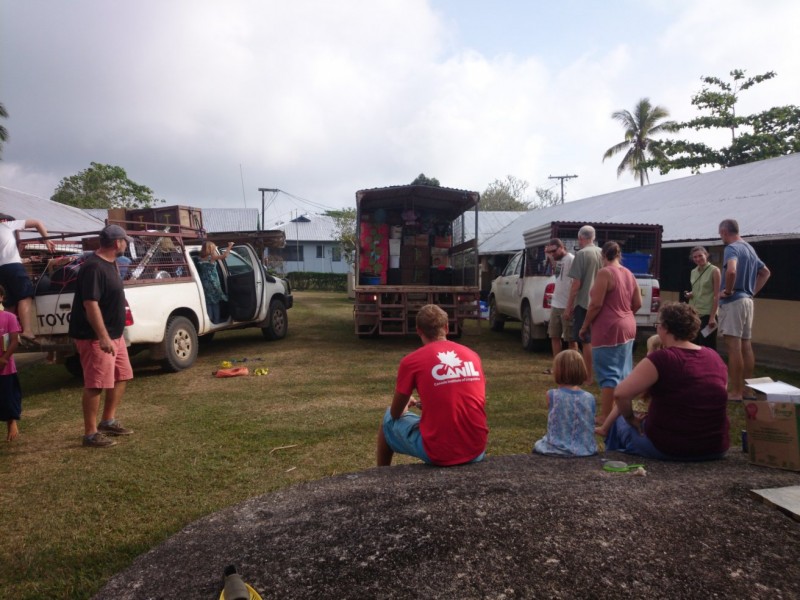 Preparing to leave for village living from POC

The three single guys at this POC (Steve, Tony, and I) were assigned to the village of Bunu, a little more than an hour's drive north of Nobonob (the mountain on which POC is located). 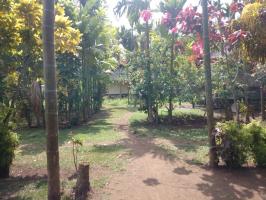 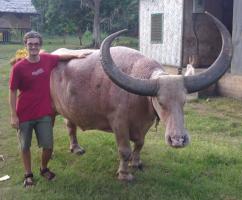 The village had two water buffalo for some reason?

The three of us had a wasfamili (host family) that looked out for us, took us places, introduced us to people, and taught us a lot about how to live in the village. They even built the house we lived in! 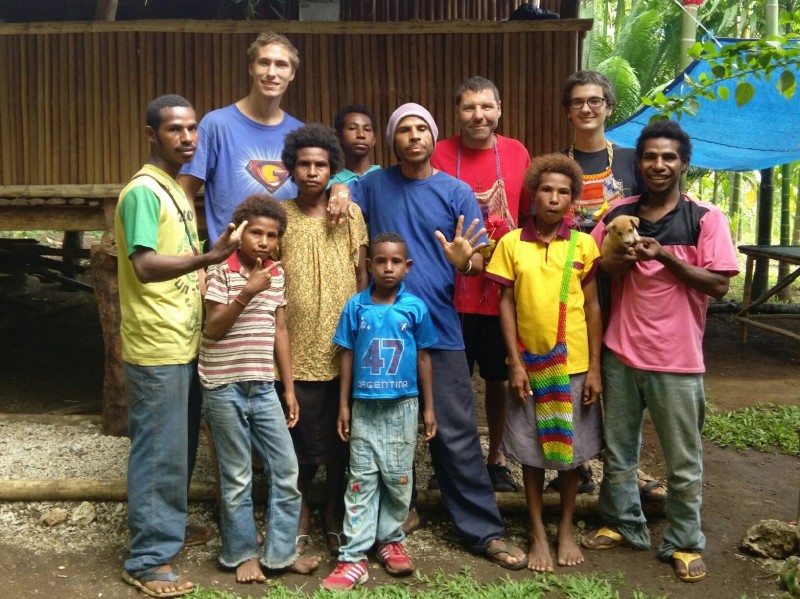 Our wasfamili. LTR: Julius, Stela, Steve, wasmama, Allen, Samuel, waspapa, Tony, Samuela, me, Effie 2 (the dog), Ephram
A typical PNG bush house lasts 12 or so years, after which the people here build themselves a new house. We spent our month living in a new house that our waspapa just built, and after we left, the family will move into the new house and tear down their old one. 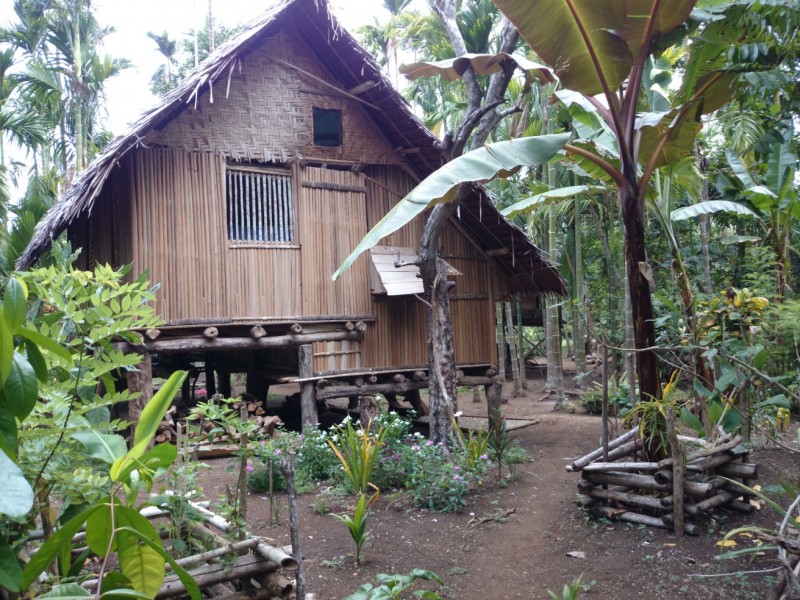 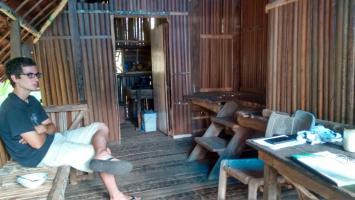 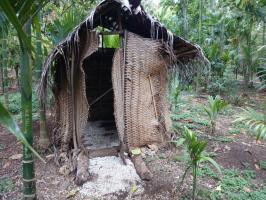 Being located right on a major road makes Bunu a somewhat atypical PNG village. Most people in PNG live by working in their gardens all day, hopefully bringing enough home for their family, and selling anything extra at the market. But the Bunu economy is powered by cash crops: cocoa, coconuts, and buai (or betelnut, which, when chewed with lime, acts as a stimulant. It's wildly popular in PNG culture.). They grow and sell these products, and use the money to buy their food. They also operate a roadside market, where they sell crackers, cookies, mangoes, and buai to passers-by. It's called Slowdown Market since it's right by a section of the road where the pavement is missing so all the cars have to slow way down. 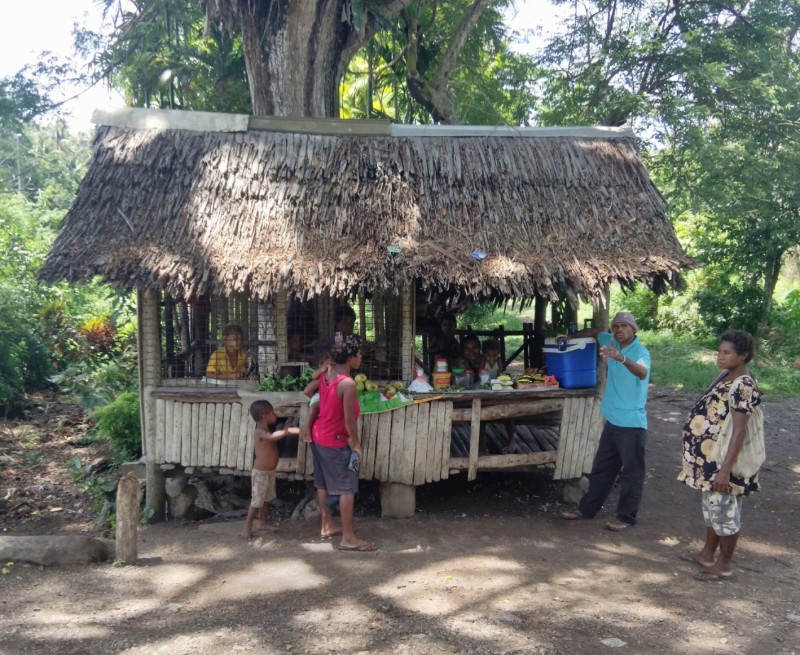 Bunu is right on the ocean, which has its perks. The beach, though not sandy, was a popular hangout spot where we got to relax and talk with people. Seafood was plentiful, and we got to watch one of our brothers go spear fishing at night. My favorite was when he shot an octopus. First they kill it by turning its head inside out, then they take the body and slam it against some rocks for a while to tenderize the meat. Then wasmama fried it up and gave us some. It was quite delicious, very salty, very chewy, but didn't taste like seafood at all. 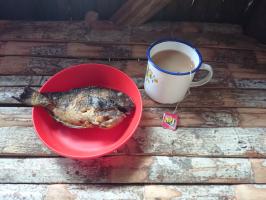 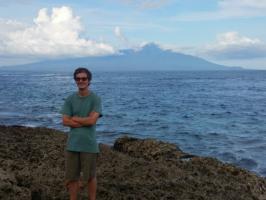 Simply surviving takes much more time in the village than in the US. To cook, you must first start a fire. Going to the store or market can take all morning: you wait by the road until a PMV (public motor vehicle) arrives. PMVs are cheap transportation, generally big vans with seats, and are nearly always completely full. So you might wait over an hour before one finally comes by that has space for you. (I forgot to take a picture of a PMV unfortunately.)

To get washing water, we (fortunately!) had a well right next to our house. Drinking water, on the other hand, was much harder to get because of the recent drought here. It got so bad that the government instituted a free truck that drives up and down the road, bringing people to a dam to fill up their containers with fresh water. Getting water is a multi-hour affair: you must first wait for the water truck to drive past, which was announced by all the kids yelling "wara wara wara!" as they dash through the village. Then you grab your containers, go to the road, wait for the truck to come back, and hope it's not full. If it's not, you join the dozens of Papua New Guineans already on the back of the flatbed and take the bumpy ride to the dam. The truck drives away to get more people as you all fill up your containers and wait for the truck to come back and take you home. Sure makes me appreciate unlimited, clean water available inside your house at the turn of a knob! 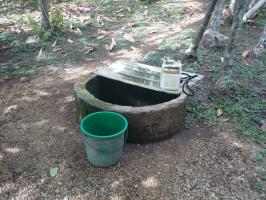 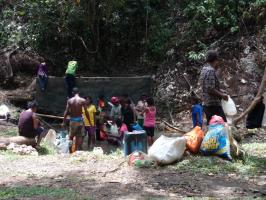 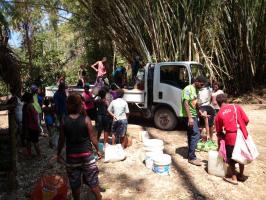 We spent lots of time storying with our wasfamili and other people from the village. Our conversation topics varied wildly, these are just a few: how to get to PNG from America, the PNG education system, how to avoid shark attacks, movies, English, magic, Obama, what American houses are made of, World War II, animals of PNG, the Chicago Bulls, and much more. They were also very interested in our thoughts about Christianity. The area surrounding Bunu is primarily Catholic, but a few other groups (especially the SDA) are growing stronger here, and several people wanted our opinion on certain doctrinal issues and passages that the Catholics and SDAs disagree upon. I had a Tok Pisin New Testament with me (I left it in the village when we left), and we were able to look up passages together, emphasizing that the Bible is the ultimate authority. 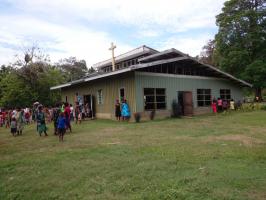 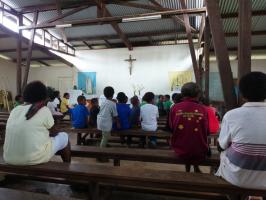 Other highlights from village living include visiting the haus sik (hospital) to get a malaria test (I didn't have malaria, but it sure felt like I did!), helping a guy named Erico build a fence around his garden... 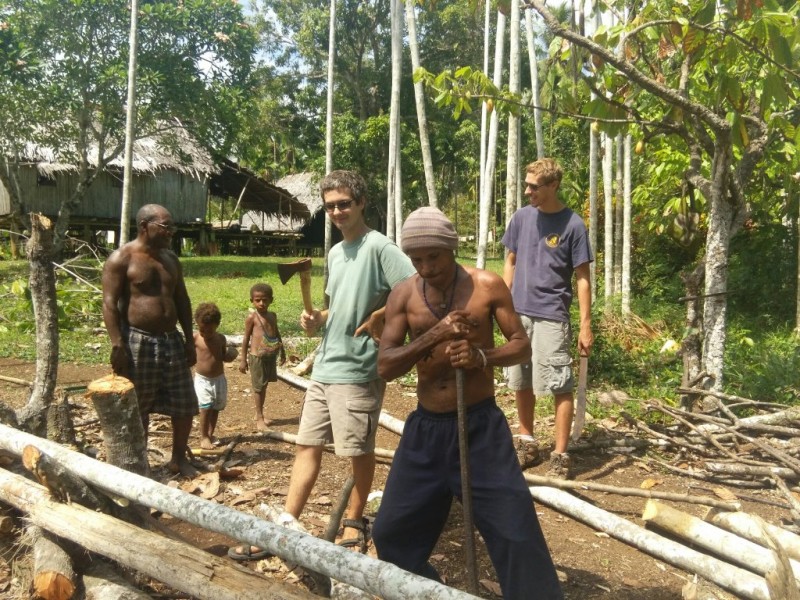 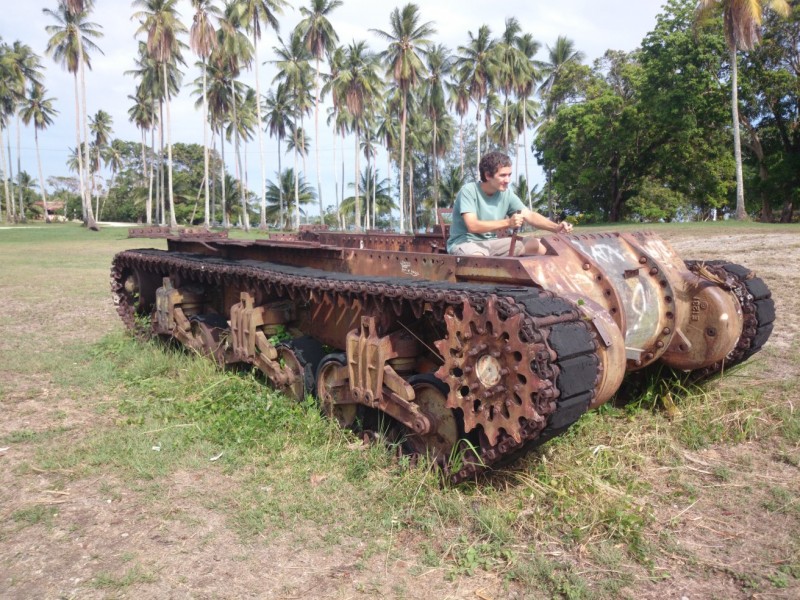 and playing in a mambu (bamboo) band. 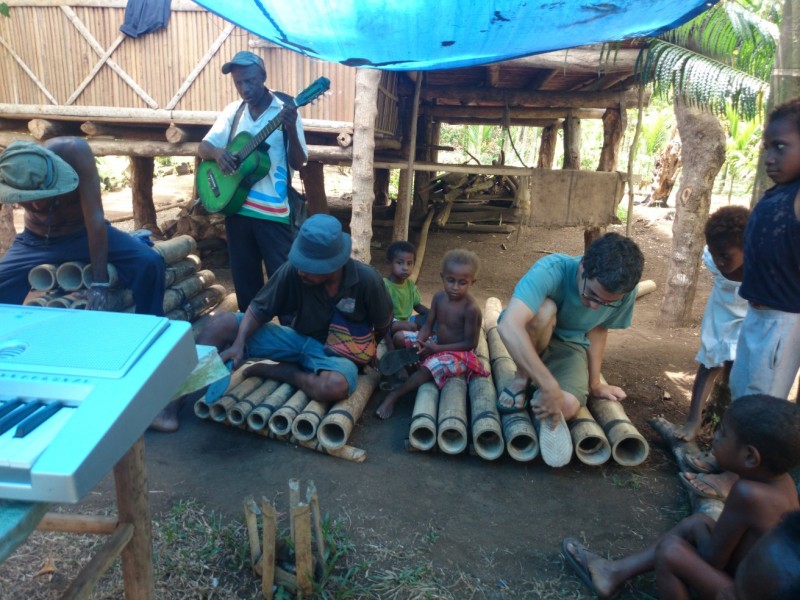 (Turn up your volume, the audio turned out rather quiet!)

As is part of the culture, there was a big farewell celebration for us at the end of our time in the village. We and many others contributed food for the women to cook, including a chicken that we watched waspapa kill and clean. (We wanted him to kill one of the chickens that liked to sit under our house and cluck all night, but those weren't good for eating apparently.) They also dressed us up in traditional ceremonial clothes which included, among other things, dogs' teeth and pigs' tusks and bird of paradise feathers. We even attended a morning church service while dressed up, which caused quite a stir among the congregation as the priest (who is from Poland) tried very hard to conceal his surprise and amusement at our unexpected appearance. 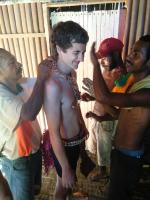 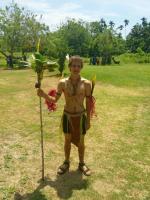 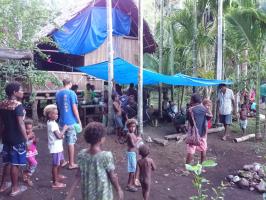 Now that my village living time is over, I'm thankful for the relationships I formed there, for the chance to improve my Tok Pisin, and also for the greater appreciation I gained for what daily life is like for the average Papua New Guinean. As I live here day after day in my house in Ukarumpa with screened windows, running water, an indoor bathroom, a refrigerator and stove, and a comfortable bed, it's easy to forget how much easier I have it than most of the rest of the people who live in PNG. My month in the village has made me realize more than ever how much God has given me, for which I am most thankful.