When the Bible is translated into another language, it is often made available to the speakers of the language in more forms than the printed word. One of the alternate formats that is most effective is the audio recording. Many cultures value the spoken word over the written word, and even in those that do not, an audio recording is able to be understood by everyone regardless of their level of literacy. Historically, audio Bibles were distributed on devices dedicated to the purpose, such as the Proclaimer or Audibible. 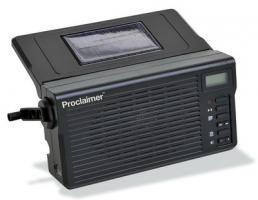 These devices offer many advantages: they are rugged, solar-powered, and simple to operate. However, they are more expensive than some people can afford, and their availability is limited. In recent years, the rise of the smartphone has offered a new way of distributing the translated scriptures that solves some of the drawbacks of the dedicated devices. By creating apps containing the text and audio recordings of the Bible, we give people the ability to access the translated scriptures for free on devices they already own and know how to use. The Scripture App Builder, a tool created by SIL, allows us to easily create apps for different languages.

Because they include the written text and audio together, these apps are also useful as literacy tools. As the audio recording plays, the app highlights each verse on the screen as it is read aloud. In this way, people can practice and improve their reading skills by following along with the recording.

In order to highlight each verse as it is read, the app needs to know the start and end timings of each verse in the recording. (For example, verse 1 starts at the beginning of the recording and lasts 4.3 seconds, verse 2 starts at 4.3 seconds and lasts 3.8 seconds, and so on.) By using speech-to-text technology, this can be done mostly automatically by using a computer to analyze the recording and text together. But sometimes the computer gets confused, so a human usually needs to listen and follow along with the results and manually correct the timings if the verses are not highlighted at the right time. The Scripture App Builder provides an interface for making these corrections.

Recently, someone here in Ukarumpa who is checking a new app for the Arop language asked me to make some tweaks to the Scripture App Builder to make it easier for him to modify the recording timings. Specifically, he wanted a way to be able to save his changes mid-chapter and load them back up later. I was able to fulfill his request, as well as add an auto-save feature so that his work would not be lost in case of a power outage. He was very appreciative of the changes I made, and for my part, I enjoyed being able to work on software that is more directly related to Bible translation.